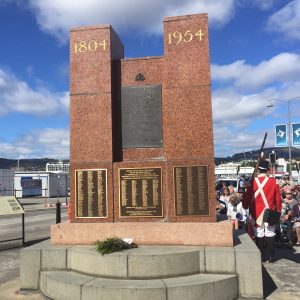 20th February, 1804 – Hobart Town First Settlers 1804 – Lieutenant Governor of Tasmania, David Collins When David Collins put his hand up for the job of Lieutenant Governor of Van Diemen’s Land, I bet they never went into detail about what he was in for: bushrangers, escaped convicts, disgruntled settlers, corrupt officers, poor supplies, poor tools and head office 10,000 miles away. At first glance you may think he was well suited for the job, having served in the British military, and was Judge Advocate for the 1788 settlement in New South Wales – even though he hadn’t any legal training. Back then it was all about who you knew, not what you knew. In February 1804 Collins became the first Lieutenant Governor of Van Diemen’s Land, responsible for establishing Hobart. Right from day one things were tough. Isolation, corrupt officers, trouble making civil servants, lazy military, no support, unskilled convicts, unreliable free settlers and no cohesive labour force. His request for London to send help resulted in the arrival of 500 settlers, all ex-convicts, coming from Norfolk Island, full of resentment and hungry bellies into an environment of harsh frontier farming and terrible famine. No courts, drunkard vicar, and nowhere to lock up the convicts combined to create the first Australian bushrangers, a term first coined in Hobart Town. Still deaf to the pleas of Collins for more help London accused him of fraud and waste, on top of which Governor Bligh (yes, Bligh of Mutiny on the Bounty fame) had the temerity to criticize Collins for a string of extra-marital relationships with convict women. Under all this pressure, it’s no real surprise that Lt’ Governor David Collins should have a heart attack and die – at his desk – just 6 years into the job. He is memorialized by the naming of Collins St in Hobart and Melbourne, St David’s Park and Cathedral, as well as a lovely sandstone monument erected 30 years after his death by Governor Franklin.