Dodgy as a District Constable

The case of Constable McQueen and the notorious Mrs Saunders. Policing in colonial Hobart was a matter of contention for many years, as it was for every British colony. Hobart, however seems to have been the stand-out example of how not to do it. Under Governor Arthur (1824 – 1837) the colony of Van Diemen’s Land became the most policed state anywhere in the world.  This autocratic governor created a policing system with 1 policeman to every 88 people, and many of these police constables were recruited directly from the ranks of the convicts still under sentence. Another aspect of the system was the payment of penalty fines for misdemeanours such as public drunkenness or not attending church. Half the fine paid by the offender was given to the arresting constable leaving enormous opportunity for corruption and abuse of powers. At the end of the reign of Gov’ Arthur, subsequent governors reduced the size of the police force mainly due to funding constraints as the British government refused to support such an expensive local colonial police force. These later governors there was increased public concerned about moral issues especially in regards to the proliferation of pubs and ready access to alcohol. After the end of convict transportation in 1853, a re-branding exercise occurred. The most obvious being the name change from Van Diemen’s Land to Tasmania. A more subtle change was the emersion of an unwritten ground rule to not mention or enquire into anyone’s convict background. To raise the issue in public or even hint at it in the press was considered profoundly impolite and not the behaviour of a respectable member of society. In order to become an acceptable member of society all that was required was to live a quiet, conservative life, go to church and be a responsible, sober, hardworking citizen. The idea was that through hardwork and good deeds anyone could become worthy of a place in respectable society which gave everyone an opportunity to overcome a difficult background. As a result after 1855 Hobart became a very conservative, law-abiding city with a very low crime rate. The influence of the city spread to the regional areas, such as Richmond in the Coal River Valley just a half-day’s ride from Hobart. By the 1880s Richmond was well over its earlier crime wave that had led to the construction of the Richmond Gaol in 1825. 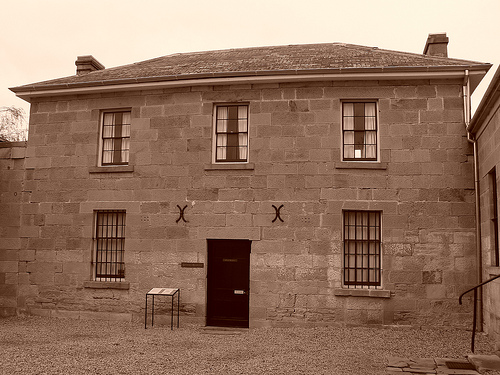 Life became downright dull for the local police constables, reportedly that Richmond was as dull as dishwater. Unsurprisingly when there is nothing for a police constable to do then the police constable will get up to no good. One constable in particular was Constable McQueen who, one boring afternoon while on duty, spent some time getting drunk with Mrs Saunders in the back room of the Lennox Arms Hotel situated on the main street of Richmond. 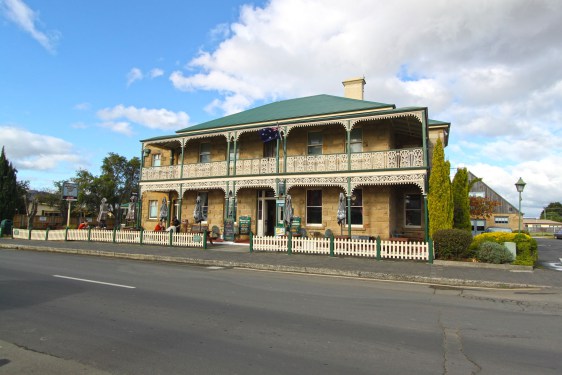 One thing led to another and pretty soon Constable McQueen and Mrs Saunders were hard at it in the stables. Mrs McQueen had her suspicions and had been in search of her husband for some time when she finally came upon them. Outraged, she beat her husband with her umbrella so hard that it broke into pieces and in reply he threw his handcuffs at her. Weighing about 1 ½ kg the handcuffs would have caused some considerable damage had they connected with her head at which they were aimed. The afternoon’s dalliance resulted in Constable McQueen’s resignation in order to avoid charges of misconduct. Mrs McQueen was banned from having an umbrella in public for a month. Mrs Saunders? 6 months incarceration at Richmond Gaol having been charged with vagrancy, although it was well known that Mrs Saunders was a property owner in her own right. So what was the crime here? Still unsure about that but it is a fine example of how you can get away with anything if you are a dodgy district constable. 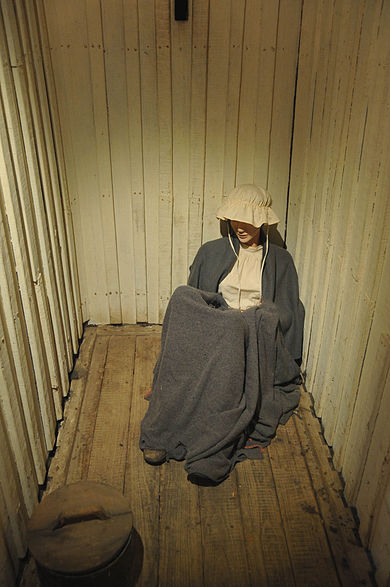