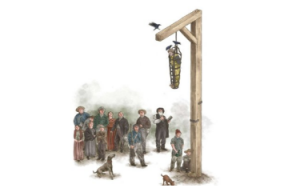 Grisly and Grim – the Hobart gallows and gibbet

We stop at many interesting locations on our walking tours and one place that consistently alarms and amazes guests is the location of the gallows, which was in use in the British colony from 1806. This site today is marked by the monument to our First Fleeters, at what is now the intersection of Hunter Street and Franklin Wharf, right in front of Macquarie Wharf 1. This area was originally known as Hunter Island. 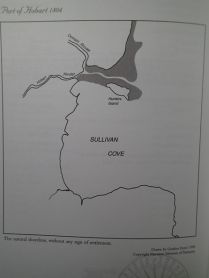 Alongside the gallows was erected a gibbet. Gibbeting is the use of a gallows-type structure from which the dead or dying bodies of executed criminals were hung on public display to deter other criminals. While this strikes us a barbaric and horrific practise, right up until the middle of the British colonial era gallows and gibbets were commonplace structures for public execution both in England and the colonies. They were located in places of significant traffic and were important for their visibility, being positioned along major traffic routes and boundaries of local districts. Public gallows and gibbets have been in use since ancient times as a supposed deterrent to potential criminals. In particular from the European Medieval Period on to the early Modern Period (C.E. 500-1840) public execution and display of corpses were a common element of the landscape, in both rural, urban and city environments. Post-execution dissection and gibbeting were punishments that had long been established in England and her colonies for murder, robbery, sheep-stealing, forgery, rape and sodomy.  Gibbeting was formally legalised in Britain by the Murder Act of 1752. This Act stated that, ‘in no case whatsoever shall the body of a murderer be suffered to be buried.’ The Act mandated either public dissection or the ‘hanging in chains’ of the corpse, often both. The intention was that the body of the criminal would be left as a grim reminder and would stay on the gibbet for a year or more until it rotted away or was eaten by birds. It was also part of a religious superstition that in order to be resurrected the body had to be buried intact in a churchyard. Many citizens were offended by the sight and odour of a decaying body, others believed that the decaying bodies spread disease; others felt that being hung by the neck till dead was enough. The location of the Hobart gallows and gibbet was very intentional.  Anyone looking towards Hunter Island would see the grisly sight – especially the newly arrived convicts who were unloaded from the convict transport ships directly on to Hunter Island.  It was intended as a reminder to heed the laws of the colony. The last man gibbetted in England was William Jobling on August 21st 1832. The last man in the British colonies was convicted murderer John McKay, in 1837. He was gibbeted on a tree beside the Midland Highway, just north of Perth, Tasmania. 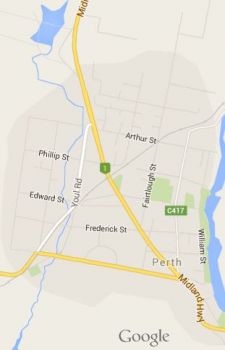 In earlier times, up to the late 17th century, live gibbeting also took place, in which the condemned was placed alive in a metal cage and left to die of thirst. In some cases, the bodies would be left until their clothes rotted or even until the bodies were almost completely decomposed, after which the bones would be scattered. So that the public display might be prolonged, bodies were sometimes coated in tar or bound in chains. A well crafted gibbet was a body-shaped iron cage used to contain the decomposing corpses, with records detailing the remains hanging in the gibbet for more than 20 years. Some historic victims of the gibbet:

Hobart’s docks area was saved from the horrors of public execution in the mid 1820s, with the removal of the gallows to the newly built convict barracks at the corner of Murray and Macquarie Street. This prison was the location of the execution and dissection of the first woman to be executed in Tasmania: Mary McLauchlan. She was tried and executed for infanticide – a crime that was rarely punished in Britain at that time. The executioner was entitled to keep and sell the clothing in which Mary was executed, and then her body was handed over to the local surgeons for dissection, which was their only opportunity to study anatomy. Public hangings ceased in NSW in 1853, VIC 1854 and Tasmania in 1856, as they were perceived to be barbarous public spectacles. The last execution in Tasmania was in 1946, with capital punishment being abolished in 1968.