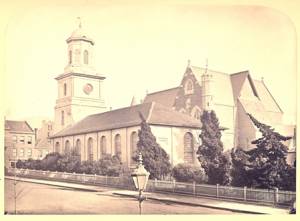 Hobart’s first public clock was requisitioned by Governor Davey in 1816 in order to “better regulate the hours and habits of the inhabitants of Hobart.” It was installed in the new tower of the old St David’s church, corner of Murray & Macquarie Streets in 1825. This is what the original tower of St David’s looked like, with just one clock face. The clock was built in England in 1821, arrived in Hobart 3 years later and it took another year before it was finally installed in St David’s tower in 1825. The public demanded more than just one clock face, so Governor Franklin had two more installed, one in St Andrew’s Presbyterian Church and the other as the second face in St David’s tower. 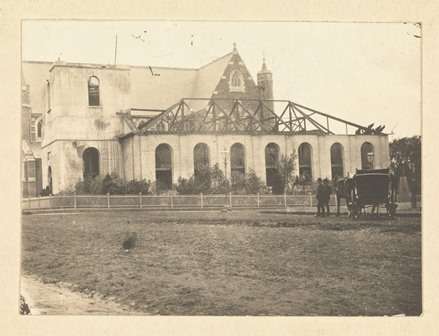 In 1855, with the building of the new Government House up near the Botanic Gardens, a clock was required for that tower, so the first one installed in St David’s was removed and installed there. When old St David’s church was demolished in 1874 to make way for the new cathedral, the remaining St David’s clock was removed, left in storage until it was installed in St Luke’s church at Richmond in 1922. The above picture shows the demolition of the old St David’s in 1870. So what was St David’s – and Hobart – to do without a large, public clock? (The GPO clock didn’t starting ticking until 1905). In 1874, a large meeting of ‘gentlemen’ was held at the Town Hall to organise a way to solicit funds from the general public for a new clock for the new cathedral tower. It was considered that the public had, over the preceding 50 years, taken such advantage from the clock in the tower of St David’s church that the public could now fund the purchase and installation of a new one in the new cathedral. The Bishop considered this to be a reasonable claim for the church to make upon the public. 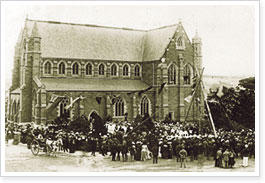 The resolution of the meeting held that the installation of a clock and the importance of maintaining a ‘public standard of time’ were urgent and necessary, requiring the co-operation of every class of Hobart’s citizens. The decision was made to request the public to raise the funds. 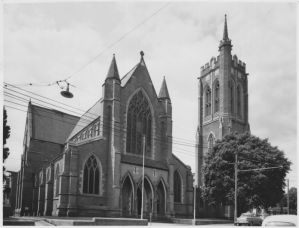 As you can see there isn’t a clock in St David’s cathedral above, which was completed in 1874. The bell tower was completed in 1936 – still no clock. So, Why didn’t they just put the old clock that was in storage until 1922 into the new cathedral? What happened to the funds raised from the public? If you know the answers to this great mystery, please share!